Words of Resilience: A Benefit for Ukraine

Ukraine has produced wonderful authors of fiction, non-fiction and poetry and many celebrated musicians. WORDTheatre is shining a spotlight on Ukraine’s rich literary culture to remind us of how much we all have in common. We are raising much needed funds for the country’s children.

Alla Sirenko, Ukrainian pianist and composer, will weave the stories and poems together with her playing, as this extraordinary cast of actors shines a spotlight on Ukrainian authors in tribute and prayer.

A minimum of £10 from each ticket will go directly to the purchase of equipment for Okhmatdyt (Kyiv Children’s Hospital is the largest in the country). All donations will be delivered via the Ukrainian Cultural Association of the UK and you can rest assured that they will be received.

“A Tribe of Ghosts,” an essay written and read by Kate Ryan

Lesley Nicol performs “Conservation,” a story by Kseniya Fuchs. Translated from Ukrainian by Ali Kinsella.
From Words Without Borders

Simon Callow performs “Not a poem in 40 days…,” a poem by Borys Humenyuk. Translated from Ukrainian by Oksana Maksymchuk and Max Rosochinsky.
From Words for War: New Poems from Ukraine.

Christopher Eccleston performs  “Our platoon commander…,” a poem by Borys Humenyuk. Translated from Ukrainian by Oksana Maksymchuk and Max Rosochinsky.
From Words for War: New Poems from Ukraine

Harry Lloyd performs “Latifa,” a poem by Ostap Slyvinsky. Translated from Ukrainian by Anton Tenser and Tatiana Filimonova
From Words for War: New Poems from Ukraine

Alla Sirenko’s composition style has been described by critics as ‘magic realism’. She is one of the most prominent composers and pianists that emerged from Ukraine in recent years and her works have gained recognition in Europe and beyond. She has 3 Degree Diplomas: from the Kyiv Conservatory as a pianist, from the Tallinn Conservatory as an organist and from the Lviv Conservatory as a composer. She also studied at Cambridge, Moscow and Lubeck.

Alla was the first Ukrainian composer to be premièred at the Royal Opera House, London through her opera-fantasy The Golden Penguin. She was for 10 years a Composer in Residence for the Lviv Opera House in Ukraine, where her operas and ballets became part of their main repertoire there. In addition, Alla continues to work for Sony Music Publishing and Warner Brothers as a film composer.

Her composition and performance of Ave Maria, especially commissioned for the late Pope’s visit to Ukraine, was televised to several million people around the world. Some of her latest commissions include Mosaics of the Sea for 2 French Horns and orchestra for soloists from London Symphonia for Dartington Festival, and the chamber opera “Antract for Primadonna”, based on life of the friend of Puccini, the Ukrainian famous singer-Solomia Krushelnitska for The Lviv Opera Theatre.

Alla was for the last six years the Composer in Residence, Producer and Artistic director of the Ukrainian Cathedral Concert Hall in Mayfair, London, where she was organising classical concerts and events regularly. In the autumn 2020 year she became President of the Ukrainian Cultural Association in the United Kingdom (UCA-UK),  www.ucauk.com where various cultural and music events takes place regularly to promote the best Ukrainian and International talent in the UK and beyond,  and to help for vulnerable people in Ukraine through charitable donations from these events. 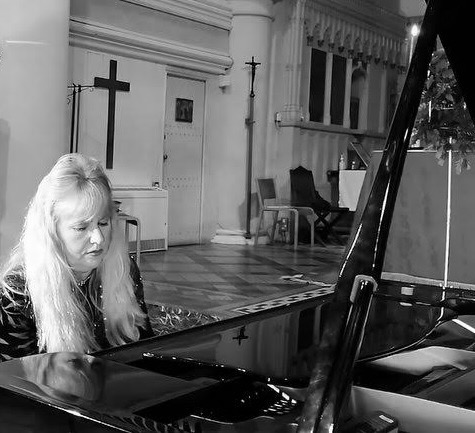 If you have the means to contribute, please support WORDTheatre by becoming a Patron or Enthusiast Member.

Not ready to do that? Become a FREE Listener Member.

Contributing Members and Donors support the creation of all our original programming, including our FREE weekly Short Story Podcast.
You also help underwrite WITS: WORDTheatre in the Schools. For 20 years, this one-of-a-kind program has been bringing well-known actors and authors into Los Angeles and London schools.

WORDTheatre is a 501 (c)(3) in the US and is in the process of registering with the Charity Commission in the UK. Paid Memberships and Donations have tax benefits as allowable by law. Patron & Enthusiast Memberships automatically renew each year after a reminder email.